Byron Palmer began to show signs of an artistic talent at an early age. Always drawing and painting as a child he soon earned the reputation as ‘the arty one’ amongst his friends and family. While at school Byron continued to develop his drawing skills and his detailed style. He also developed an interest in the history of art and he amassed a collection of books on his favourite painters.

After school Byron enrolled on a first year introduction course in art and design at Newark & Sherwood College. The following three years saw him study at West Notts College of art specialising in fine art, illustration, painting, drawing, film and photography. The course allowed Byron to develop his own drawing style further to create his cartoon illustrations. The course also introduced Byron to oil painting on canvas and working in other media.

A few years later Byron decided to become a full time artist working mainly on commissions from his studio, based in Nottinghamshire.

More recently, he started work on a series of large cartoon illustrations, using his own unique style. Byron’s ‘Great Mates’ illustration artwork combine his busy, detailed, colourful drawing style with fun, socialising party scenes. New cartoon illustrations are being drawn and will be made available as prints when finished. 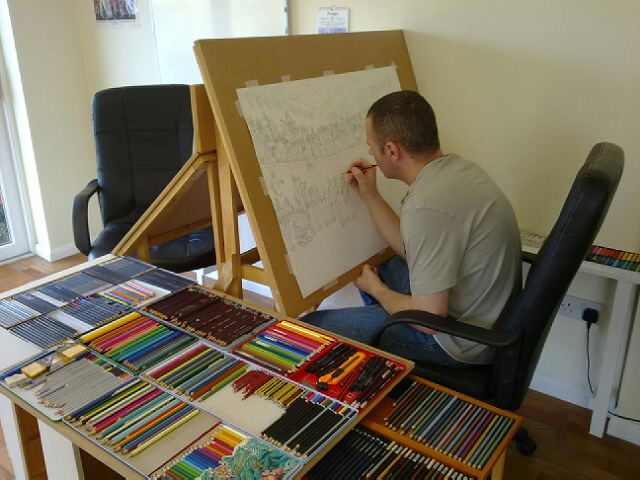 Byron Palmer working on an illustration. 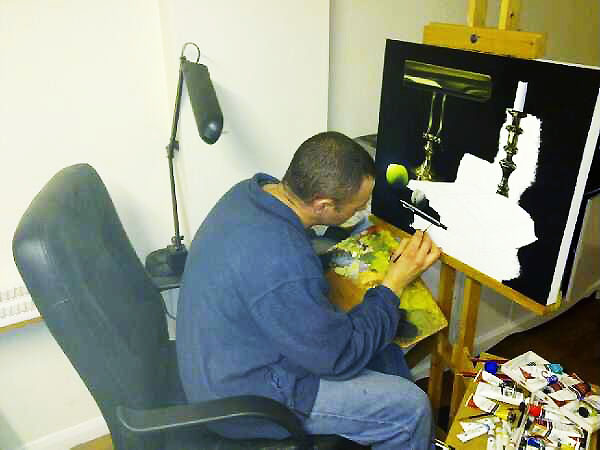 The artist Byron Palmer at work in his studio.

The Great Mates illustrations are hand drawn by Byron in pencil (usually 2B) on A1 sized, 140lb paper before being inked in with Uni pin fine line ink pens. Then they’re coloured using professional quality pencil crayons, although Byron has sometimes borrowed cheap kids pencil crayons, much to the frustration of his nieces!